On any given day 50,000 youth are incarcerated in America’s juvenile justice system.  Seemingly harmless names like “training schools” and “academies” are used to obfuscate an archipelago of youth prison environments sprawled across the US where minors are subjected to restraints, brutal violence, and the use of solitary confinement. A group called the Youth First Initiative is taking aim at these facilities with a simple demand, #NoKidsInPrison

Youth First is a growing national constellation of organizations from Kansas, Virginia, Connecticut, Wisconsin, and New Jersey that launched in 2015 with a goal of closing youth prisons.  The coalition’s tireless efforts have already lead to commitments to close 5 facilities in 4 states, with many more joining a growing list of facilities under scrutiny from state and federal authorities.  This Friday, the Larned Juvenile Correctional Center in Kansas will close after 45 years of operation. The closure of this medium/high security facility, designed to imprison 170 youth, marks a significant victory for Kansans United for Youth Justice, part of the Youth First Initiative. 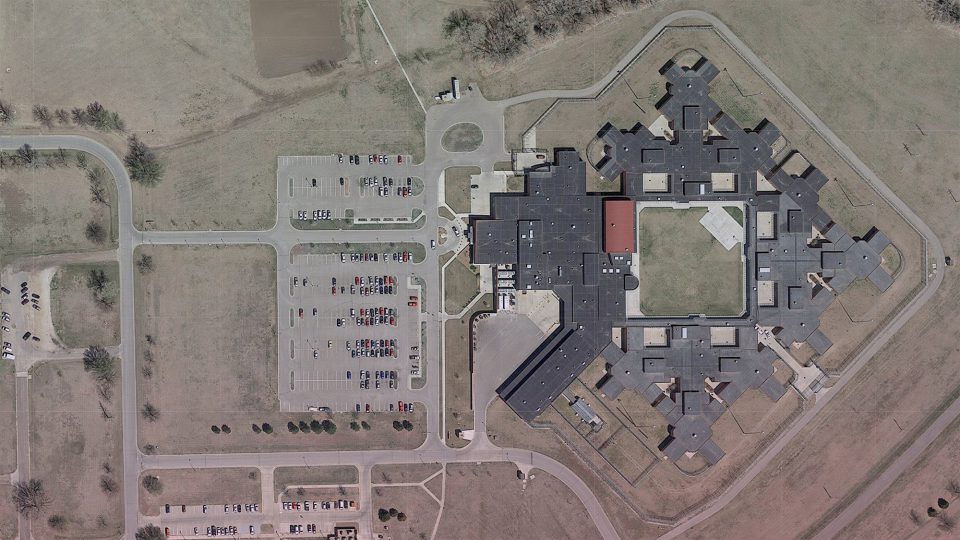 After successful campaigning by Kansans United for Youth Justice and The Youth First Initiative, the Larned Juvenile Correctional Facility is slated for closure on Friday, March 3, 2017

Today’s political climate underscores the importance of Youth First’s work. While youth incarceration has been on the decline for over a decade (due in part to the efforts of Youth First and myriad other juvenile justice advocates) signals from Trump Administration and Attorney General Jeff Sessions raise concerns that the youth prison complex may see renewed vigor.

This short film about Youth First’s efforts was produced by our partners at Balestra Media on behalf of Youth First, with direction from Sparrow’s cofounder Andy Stepanian, Christina DiPasquale of Balestra Media and Jeffrey Wirth of Burning Hearts Media.  A full credit list is included below.

[NEW YORK, NY] The Campaign to End the New Jim Crow, in partnership with NCPCF, CAIR, DRUM NYC, The Sparrow Project and Justice by the Pen will present a historic “town hall” style discussion on state repression, the prison industrial complex, and the war on terror, This Thursday April 18th, at Riverside Church.  Constance Malcom (Mother of Ramarley Graham) and Yusef Salaam (wrongfully charged in the Central Park Jogger case) will join a dozen presenters —each with unique stories of imprisonment, entrapment, or experiences with clients who are currently imprisoned at facilities like Guantanamo Bay— and field questions from the community and press in an open space format.

The US’ “War on Drugs” and “War on Terror” have produced a parallel system of state violence and social control, manifested through unjust prosecutions and the mass incarceration of people of color. Join us on April 18th from 6:30-8:30pm for a historic town hall discussion wherein we will hear first-hand stories from former prisoners, family members, lawyers, intellectuals, historians and activists about excessive  sentences, discriminatory policing, suppression of political dissent, and mass incarceration.

Constance Malcom
Mother of the late Ramarley Graham. In February 2012, Graham was slain by NYPD officers while unarmed in his grandmother’s Bronx home.

Yusef Salaam
Wrongfully convicted in the Central Park jogger case. Yusef sits on the board of the Campaign to End the Death Penalty, the advisory board for the Learn My History Foundation & Inspired People United for Children.

Shaheena Parveen
Mother of Matin Siraj, who was entrapped & charged as a terrorist in a fabricated NYPD plot to destroy NYC landmarks.

Faisal Hashmi
Co-founder of the Muslim Justice Initiative. Faisal’s brother, Fahad, was accused of providing material support to Al-Qaeda.  He is currently being held in solitary confinement at the Federal “Supermax” Prison, ADX-Florence, Colorado.

Andy Stepanian
Cofounder of The Sparrow Project.  Convicted as a terrorist in 2006 for his animal rights activism & served the last 6 months of a 36-month prison sentence in a Federal Communications Management Unit (CMU).

Steve Downs
Executive Director of the National Coalition to Protect Civil Freedoms and lawyer in the ‘US vs. Yassin Aref’ case.

To arrange an interview with any of the speakers & presenters please email or text Andy Stepanian at andy@sparrowmedia.net or 631.291.3010

Although it may be hard at times to compartmentalize the work that we here at Sparrow do, avid readers of our blog and followers of our work will see some re-occuring themes. One theme is that we are critical of capitalism, another is that we are critical of the military & prison industrial complexes. With ever increasing privatization both of these complexes are growing exponentially at rates that eclipse many industrial trends world wide. An infographic recently released by the ACLU confirmed that the prison industrial complex is racist, growing, oppressive, packed with non-violent offenders, and a significant threat to our democracy. 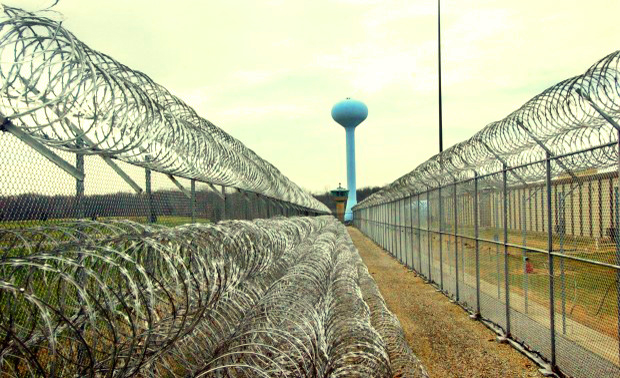 Here I sit in my cell, alone. Alone in my thoughts, yet no more than three-feet away, just outside my door, there is life. There is commotion; there is a variety of activity. A more accurate description would be “festivity.” I resist engaging in this orchestrated and organized madness induced by the prison experience.

I choose tranquility. The solitude allows me to exercise control over my own mind and thoughts. My (mental) strength increase as I avoid the debilitating views of the prison administration – which constantly promotes dependency on them – the misleading conjecture and commentary supplied by a Left or Right Wing media and the “idle” counter-productive discourse centered around who is the greatest “entertainer, athlete, or drug dealer” and how much money they have.

I am awake in my cell. “They” know this. My inactions betray me. Resistance is my only refuge. Greater men and women have attempted to camouflage themselves among the conformity only to be consumed and eventually silenced all together. Kwame Ture once said, “Years of struggle has allowed our vague, general views to become more precise and specific and provided us with the opportunity to correct previous mistakes.” And today we must continue to learn from these mistakes, as well.

The pandemonium outside of my cell forces me to stay awake. I refuse to be counted amongst the broken. Fear abated, I cautiously make my way toward the small window encases inside the door and peek out. The seconds seem like an eternity as my train of thoughts races through centuries of imagery – Slavery, Jim Crow, Black Codes, Colonialism, Apartheid, Civil Rights – toward its final destiny: Freedom, Independence, Sovereignty and Autonomy. This image of me, in my mind’s eye is reminiscent of another man, of another era, same cause, same enemy. 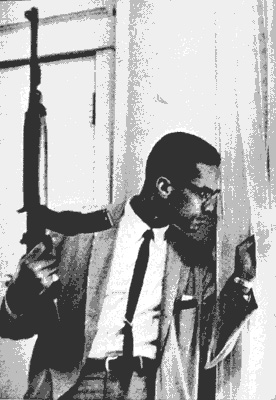 I can visualize “Malcolm” as he pulls back and peeks out of the curtains and scans the environment for any signs of danger – to himself, to his family, his community – all that is missing is my “M1,” semi-automatic weapon.    Am I Malcolm X? No. Am I his successor? No. Am I his student? No. However, what I (and I think to some degree most Blackmen and Women do, but black men particularly) share, understand and have in common with Malcolm is his “fear!” The fear that the Blackman (or any man who is subsequently not of the same race as the power structure) would not be allowed or systematically denies access to that position of power as a provider, protector and promoter of his family, culture, belief systems and governor of his own social and political affairs.  The reality that at the helm of power: power to decide; power to influence; power to control; power to penalize; power to promote; power to denounce; power to organize; power to legalize and legitimize; and power to define often lies in the hands/control of someone who does not support the cause and expansion of our interest, provides a tipping point. This is a reality check, not only as to “what is power” but who has power, and more importantly, “who doesn’t!”

At some point – consciously/unconsciously – the Blackman/ and or woman, either individually or collectively realized that it isn’t designed for him to achieve the former definition of Power, but instead he/she is to be relegated to the latter – unless one is promoting the cause of someone else – and at this time a natural sense of frustration and/or fear begins to arise within us. A Fear of being made impotent. A Fear of being made of no accord or significance. A Fear of being Forced to endure mediocrity and not being allowed to tap into that source of greatness.

This Frustration/Pain/Fear is all to often something most men and women have experienced in their lifetime, but are afraid or cautioned not to discuss. How one attempts to overcome or avoid this frustration/pain/fear (which, depends on what stage they are in their growth and mental development) of being denied that manhood and womanhood training, which grants, bestows and establishes in increments, degrees of power, control, significance and being (depending on his or her ability) ultimately, (I think) determines the path one initially chooses and it explains why Malcolm X became engulfed in being a “Vanguard, Provider, Protector, and Promoter” of values, family, and race pride. It’s why those outside my cell become engulfed in B.E.T. sports, drugs, gambling and extreme levels of black-on-black violence: to avoid that pain/frustration/fear of being “insignificant, powerless and of no concern.” And it’s why I now realize that to “go to sleep (mentally) is to Die,” so in order to “Live my Dreams,” I must stay “Awake in my Cell!”