Oil giants Shell and Eni knowingly took part in a vast bribery scheme for one of Africa’s most valuable oil blocks which deprived Nigeria and its people of $1.1billion, an exposé by Global Witness and Finance Uncovered reveals.

New leaked internal emails seen by Global Witness and Finance Uncovered show that Shell’s most senior decision-makers knew that the money they paid for oil block OPL 245 in 2011 would go to convicted money launderer and ex-Nigerian oil minister Dan Etete – rather than to benefit the Nigerian people.

Global Witness has investigated and exposed this case for six years and Shell has consistently denied any wrong-doing, saying it only paid the Nigerian government. The newly leaked emails show this denial is misleading. Emails which went to then CEO Peter Voser reveal that they knew this massive payment would go to Etete. Other emails show Shell execs were told money was likely to flow to some of the most powerful people in the country, including to then President Goodluck Jonathan.

These revelations come shortly after moves by the Trump administration and House Republicans to derail a critical rule, section 1504 of the Dodd-Frank Act, which requires U.S. listed companies like Shell and Eni to disclose payments just like these. U.S. Secretary of State, Rex Tillerson himself lobbied against this payment disclosure provision while serving as Exxon CEO.

Simon Taylor of Global Witness, said: “This is one of the worst corruption scandals the oil industry has ever seen, and this is the biggest development so far. Today’s new evidence shows senior executives at the world’s fifth biggest company knowingly entered a corrupt deal that deprived the Nigerian people of $1.1billion. That is more than the country’s entire health budget for 2016.”

Shell and Eni’s corrupt deal has huge consequences for ordinary Nigerians. Right now five million Nigerians face starvation and one in ten children don’t live to see their fifth birthday. The money paid for the block equates to one and a half times what the UN says is needed to respond to the country’s current famine crisis.

Law enforcement raided Shell’s headquarters in February 2016; six countries including the U.S. have investigated the deal. An Italian court will begin hearings on 20 April to determine whether Shell will face trial on international corruption charges. Several Shell executives from the time of the deal may face proceedings in their personal capacity.

Most alarmingly for investors, when the OPL 245 deal was being negotiated Shell had already been charged for violating provisions of the Foreign Corrupt Practices Act for paying bribes in Nigeria. Five months before the deal was struck, Shell had entered into a deferred prosecution agreement – the equivalent to being under probation – with the U.S. Department of Justice. This agreement was still in place when the deal went through. Today’s news suggests Shell may have violated this agreement by entering into a bribery scheme. It is hugely concerning that the company’s most senior executives went anywhere near this deal given the company had such serious sanctions hanging over it. 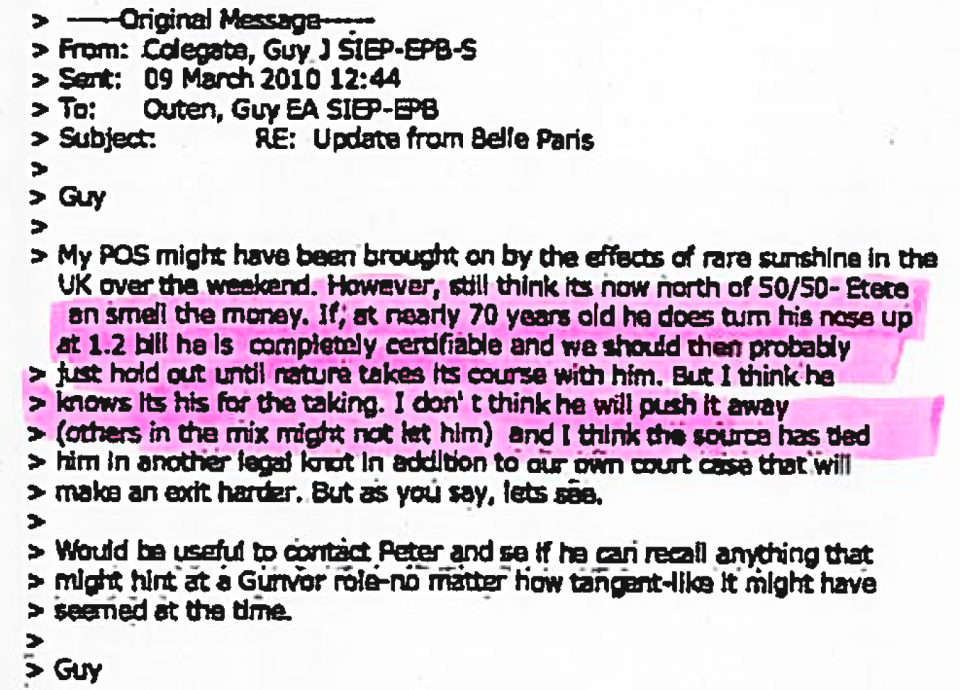 Ben Van Beurden has been Shell’s CEO since 2013. In 2015 he told Global Witness that payments for the block were “morally OK” and “in accordance with the law of Nigeria and international practice”. The leaked emails tell a very different story. Van Beurden, in a phone call wire-tapped by Dutch authorities with Shell’s CFO, Simon Henry, refers to “really unhelpful emails”. One internal email copied to then CEO Peter Voser, stated: “Etete can smell the money. If at nearly 70 years old he does turn his nose up at nearly $1.2 bill (sic) he is completely certifiable. But I think he knows it’s his for the taking.”

Shauna Leven, Anti-Corruption Campaigns Director, said: “This is a huge scandal – it must trigger change. For too long the world’s most powerful and profitable oil companies have masqueraded as leaders of responsible business, while robbing countries of their most precious assets.We could save countless lives across the world if ordinary people were able to benefit from the wealth of their own natural resources.”

“Those responsible at Shell could go to jail for these decisions. The company and its individual decision makers in this case need to face justice. Law enforcement in Italy, Nigeria, the UK, the US, the Netherlands and Switzerland need to cooperate to ensure that this happens.”

However accountability is only one part of the solution, says Global Witness. This Shell scandal is not an isolated case – the oil, gas and mining industry is the most corrupt on the planet according to the OECD. Corrupt deals like this can be prevented through strong enforcement of bribery laws together with strong transparency laws that make it impossible to conduct such deals in secret.

Leven continued: “Over 30 major economies including the U.S, UK, Canada, Norway and all EU countries now have laws in place that require oil, gas and mining companies to disclose what they’re paying any government on a project-by-project basis. Had these laws been in place at the time of the deal, Shell would have had to put these payments on public record. It is highly unlikely that they would have wanted to do that. Shining a light on corrupt deals like OPL 245 prevents multinational companies from scheming with greedy government officials to get rich at the expense of ordinary people.”

A Shell spokesperson told Finance Uncovered: “Given this matter is currently under investigation, it would be inappropriate to comment on specifics. However, based on our review of the Prosecutor of Milan’s file and all of the information and facts available to Shell, we do not believe that there is a basis to prosecute Shell. Furthermore, we are not aware of any evidence to support a case against any former or current Shell employee.” If it was ultimately proved that Etete’s company made bribe payments relating to the OPL 245 deal “it is Shell’s position that none of those payments were made with its knowledge, authorisation or on its behalf”, the company said.

Eni told Global Witness that it was not appropriate to debate the merits of the allegations as proceedings were pending. They noted “inaccurate statements and mischaracterizations of the record, including, for example, your description of the structure of the acquisition OPL 245”, continuing “none of the contracts relating to the 2011 transaction was executed secretly or designed to ‘hide’ any party’s transaction”.

Both companies said they had commissioned separate, independent investigations. “No illegal conduct was identified,” Eni has said, claiming that it “concluded the transaction with the Nigerian government, without the involvement of any intermediaries”. Shell said it had shared key findings of its OPL 245 investigation with relevant authorities and that “we do not believe that there is a basis to prosecute Shell”.

In January Goodluck Jonathan released a statement saying he “was not accused, indicted or charged for corruptly collecting any monies as kickbacks or bribes” in the OPL 245 affair.

Last week Andy Stepanian of The Sparrow Project wrote an article for The Huffington Post declaring that, “all of BP’s greenwashing can clean up their spill,” and this week that is becoming evident. The article drew a lot of responses from activists and readers alike, but one was most interesting…

Last week we got a tip from a twitter follower, that the re-branding of BP & similar greenwashing campaigns came out of a design studio in the UK called Ogilvy Earth even worse they have issued a sort of greenwashing manifesto, they call their “greenwashing guide; without the greenwashing.” It takes a lot of audacity to keep doing what they were doing without even a hiccup considering the reality of the situation in the gulf of mexico.  Now it would be foolish to somehow blame Ogilvy Earth for BP’s current mess, but they are a symptom in a larger sickness to which all of us that drive, buy plastics, or consume animals, take part in daily. These events will only stop when we drastically shift our worldview from that of a mentality of taking to that of peaceful coexistence. What if each of us upheld a worldview that the earth, it’s elements, and it’s animals existed for their own reasons and not simply for our consumption? 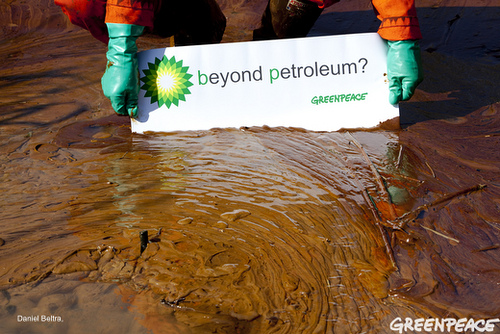 That said, our prior notions are being challenged all the time now, and not just from activists. Wether it’s figures that show a waning ecological carrying capacity, figures that show that we may have already reached global peak oil, or an exponential increase in species extinction people are being challenged with a reality that we, and the things on this earth are finite and not inexhaustible. Activists are also challenging this notions, and some of them are doing so in very creative ways. In the UK alone there were two brilliant actions last week that creatively shut down business for those responsible for the BP spill, and the destruction of the Alberta tar sands.

Greenpeace held a contest for the best re-branding of BP’s flower re-brand. This is what the very talented winner came up with, and it was so good that before it ended up on any handbills it had to replace the company flag at BP’s headquarters. This video is brilliant…